One of the most worthwhile goals to date

Connor's ongoing Rumination Syndrome (or Disorder, whatever) means he can't go to school, so it has fallen upon the family to homeschool him. Now, technically the responsibility is mine as I'm home full-time with him, but as Lee is both a qualified teacher and the "fun parent" he is also listed as being Connor's teacher.This means we work together to find new and innovative ways to educate Connor (and Erin by extension) whilst making it look like another Battersby fun-day.

One of our family goals for 2014 was to take two family outings together. Now, you might be thinking; "Two? Just two? What sort of parents plan such a tiny amount of outings?" Well, I can give you an answer to that. It's the sort of parents who have to carry multiple sick bags wherever they go as well as tissues, wipes and hugs. It's the sort of parents who have to leave any given situation in a hurry and who are never certain if the money they've just handed over will disappear in a rainbow of the previous meal/drink as they run for the car and home.

One of my goals for the year was to take a tour. I feel I live in a great state with a wonderful (and tragic) history and I'd like to view it through the eyes of a professional. I also want my WA-born children to see, feel and understand the background of the place they call home.

So, let's roll that up into one happy parcel. Connor was fairly well, so we decided to strike while we could. We packed up the car with home-made Cheesymite Scrolls, home-made scones with jam and cream and 10 litres of cordial and headed off to Fremantle Prison whereupon we paid $53 for our family ticket and took the Doing Time Tour.

I have to say at this point that our guide, Steve, was amazing. Not only did he speak with authority and gravitas, but in a room full of adults, he treated Connor* with absolute respect.

*Sidebar: Connor was the only child to ask a question: "Why were convicts made to wear the arrow on their uniform, rather than some other symbol of their imprisonment?" Within minutes Lee was surrounded by adults exclaiming "That was a fantastic question," and "I would never have thought to ask that," and  "Your son is so smart." Yeah, folks, that's my kid.

Oh, and in case you're wondering, the arrow is a trademark that means "Property of the British Government." At the point we learned this, every adult in the room oohed because not one of us had realised this. We'd all thought it was just the symbol for 'convict' or 'convict-made'. Thanks to our boy, we all learned something new.

Anyway, for 90 minutes we toured the facilities, filled in a worksheet, looked up our ancestors (Lee and I found many possible family ties within the Kielys, Battersbys and McMahons) and enjoyed some quality-learning Batt-time.

Of the interesting things we learned, we discovered that flogged prisoners really did have salt rubbed into their wounds (as protection, not punishment); that there was one warder to look after 160 prisoners in a yard and they would do nothing to interfere with a fight; that kitchen hand was the most sought after job in the gaol; that Fremantle Prison was one of the first prisons in the world to loan books to prisoners for free (they actively encouraged education) and had a library of 10,000 books; and that every year the family of Eric Edgar Cooke visit the prison to honour those whom Cooke slew. They actually visited last year on 26 January because it marked the (50th?, 55th?) anniversary since his rampage began. As a serial-killer aficionado, I find Cooke a fascinating character, so hearing this choked me up a little.

Anyway, as goals went, it was probably my favourite to fulfill. Lee, the kids and I came out of it full of excitement and chatter about what we'd seen and learned. We were also a little saddened by the execution room (Connor had to leave because it upset him) but we also enlightened by the understanding we gained about a different time and place in history.

So, at the end of the day I encourage all Perthies and visitors to check out the Fremantle Prison. For us, it was worth every penny. 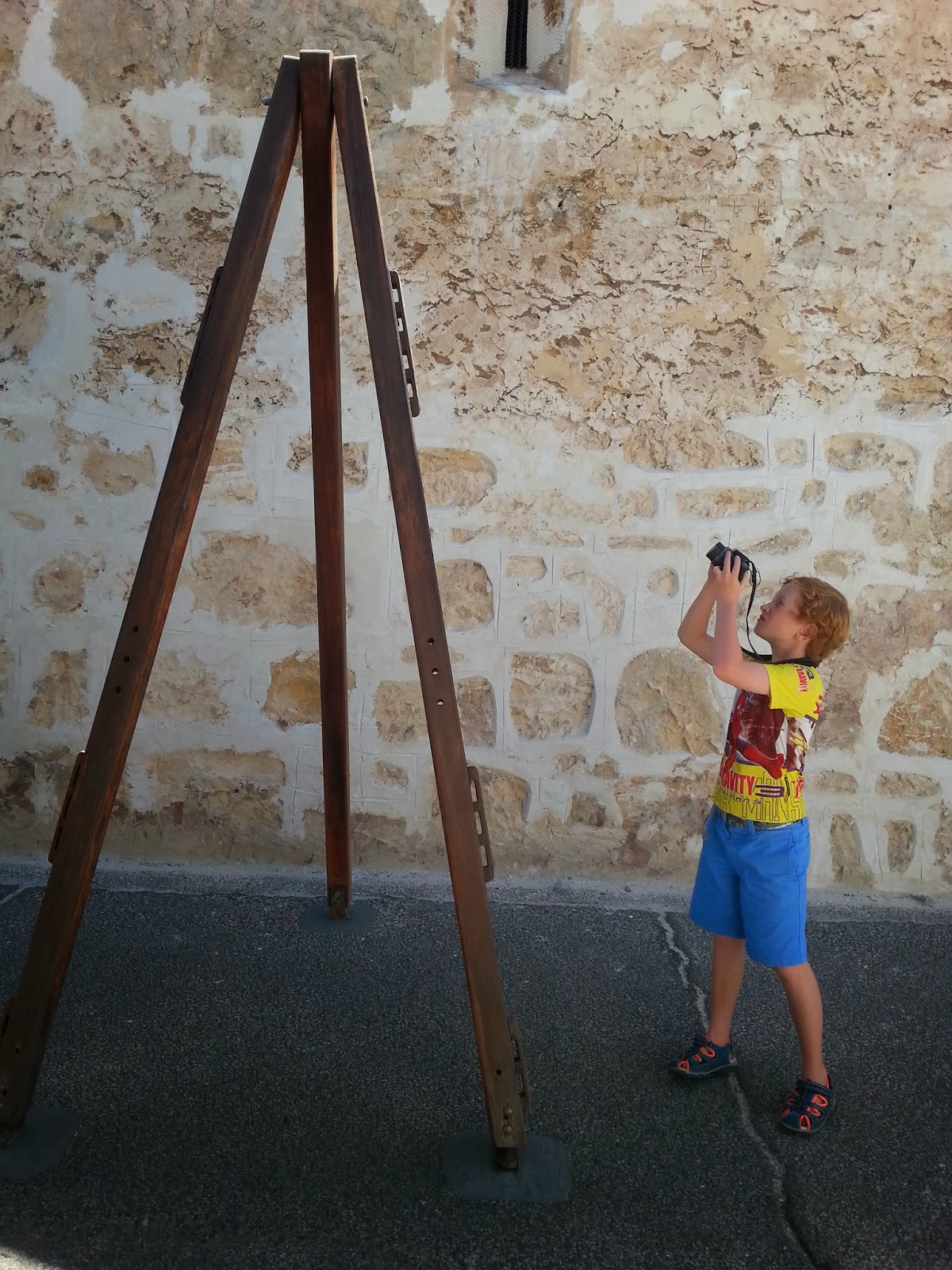 Connor and the flogging stocks. In the early days, one convict received 100 lashes with a cat o'nine tails for swearing at the C of E minister. The last prisoner to be flogged (1940s) received 25 lashes for ... his 4th count of paedophilia. 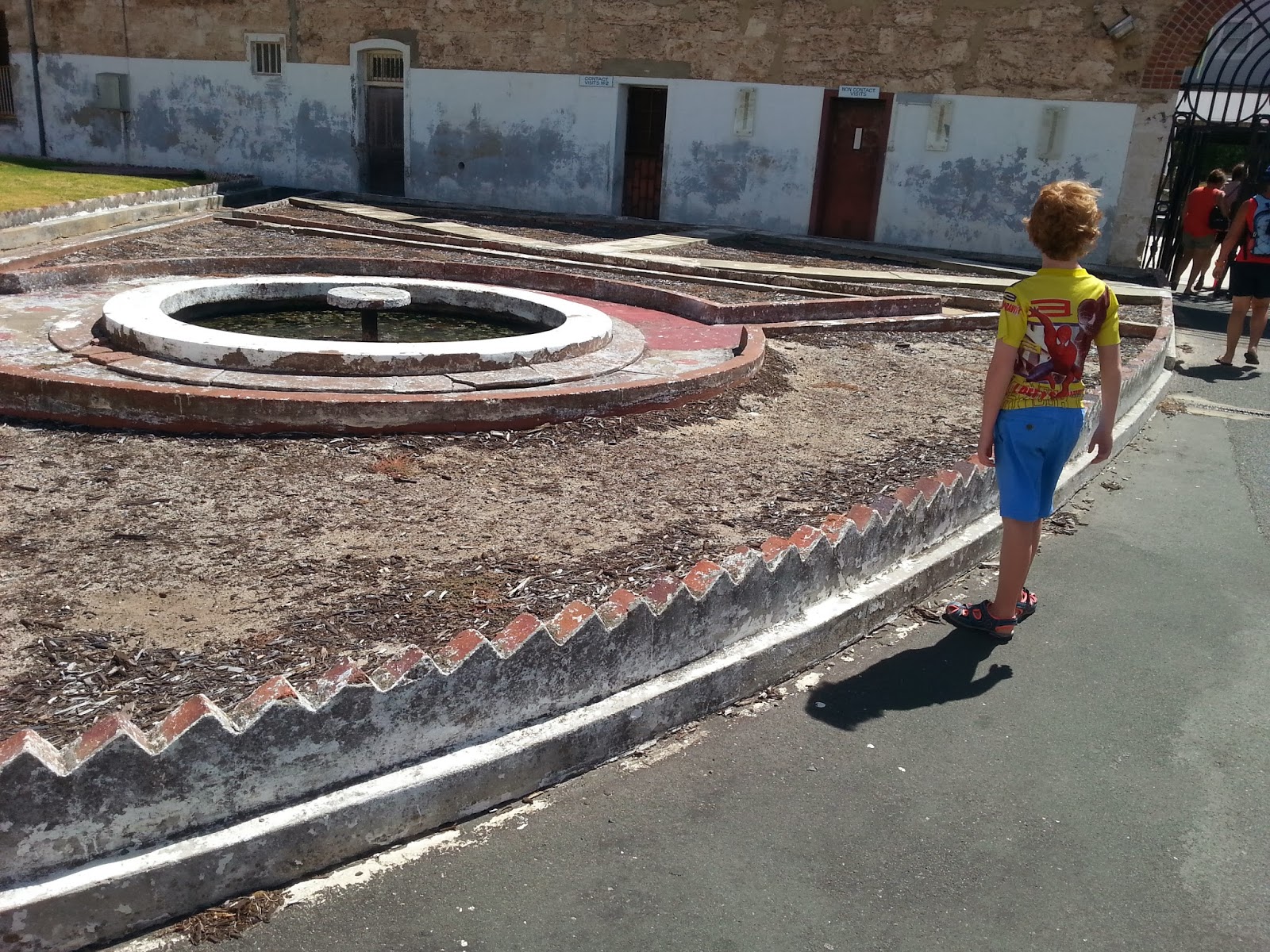 I don't know what this is, but it seems important so I took a photo. 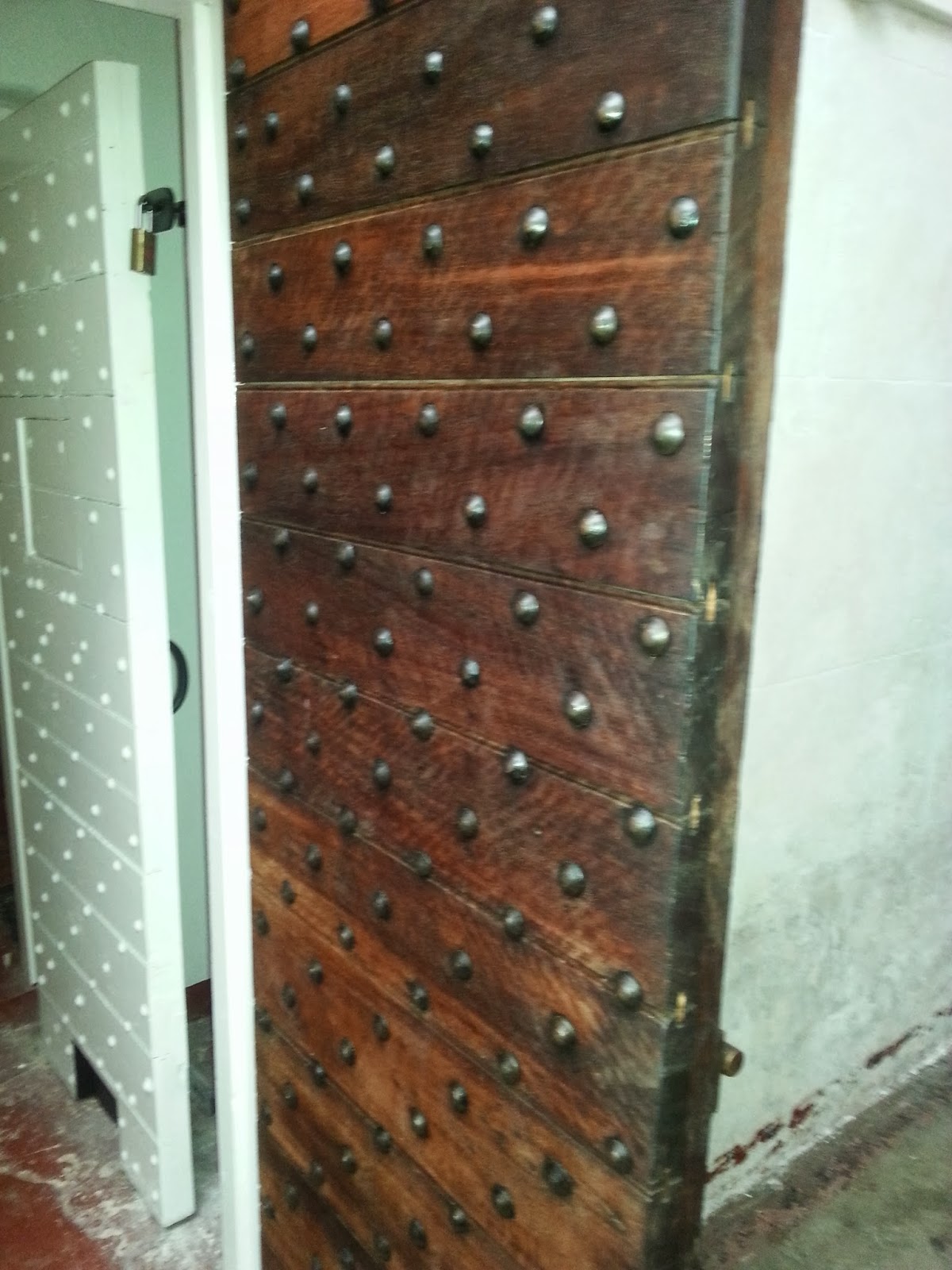 A door to a prison cell. Everyone of these contains the "Property of the British Government" arrow. The guide showed Connor first, then showed everyone else. 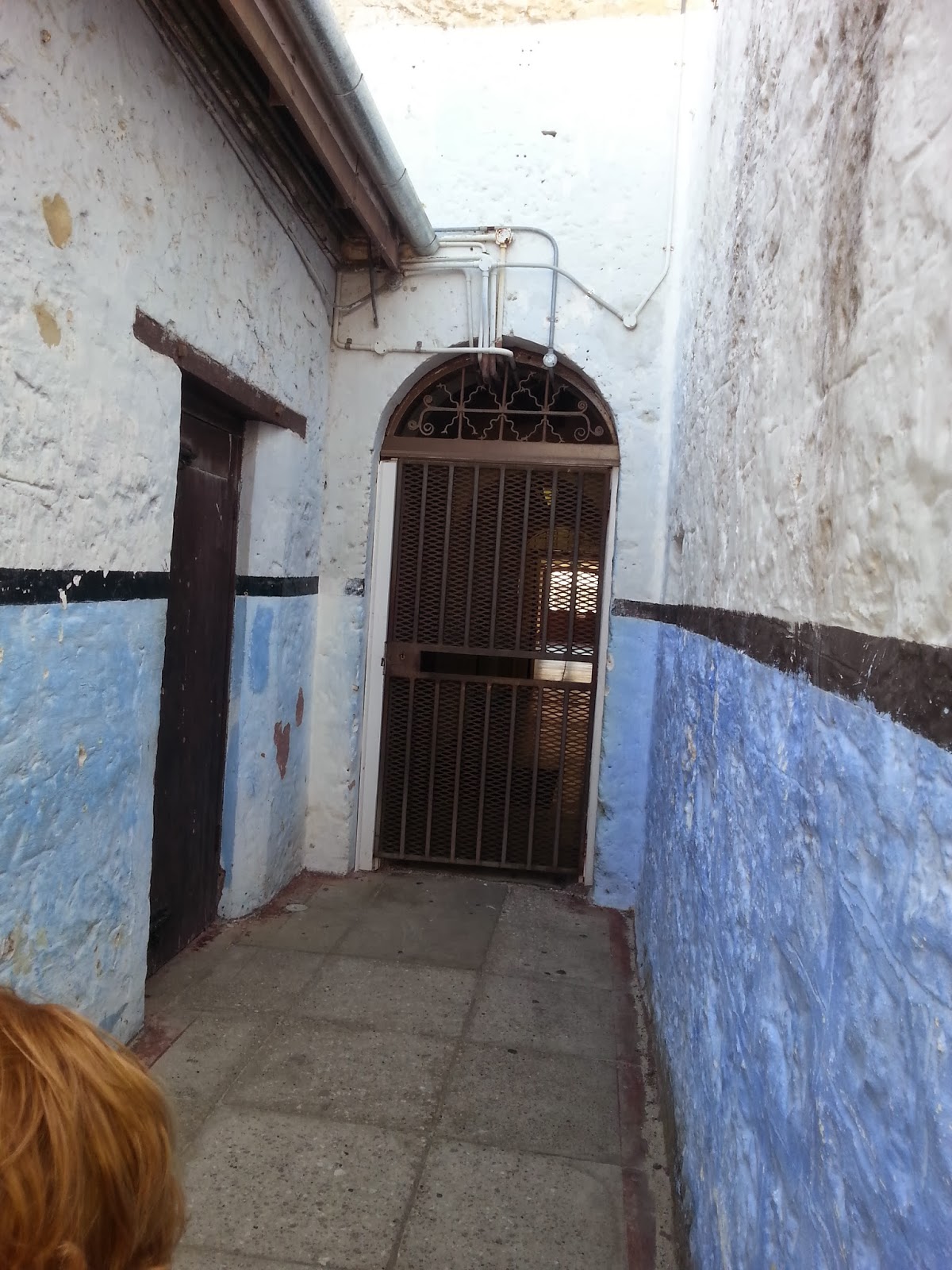 On the left you see Connor's head. To the left of that is the Execution Room, complete with noose, and 13 foot high pit. Connor left the room and I joined him. 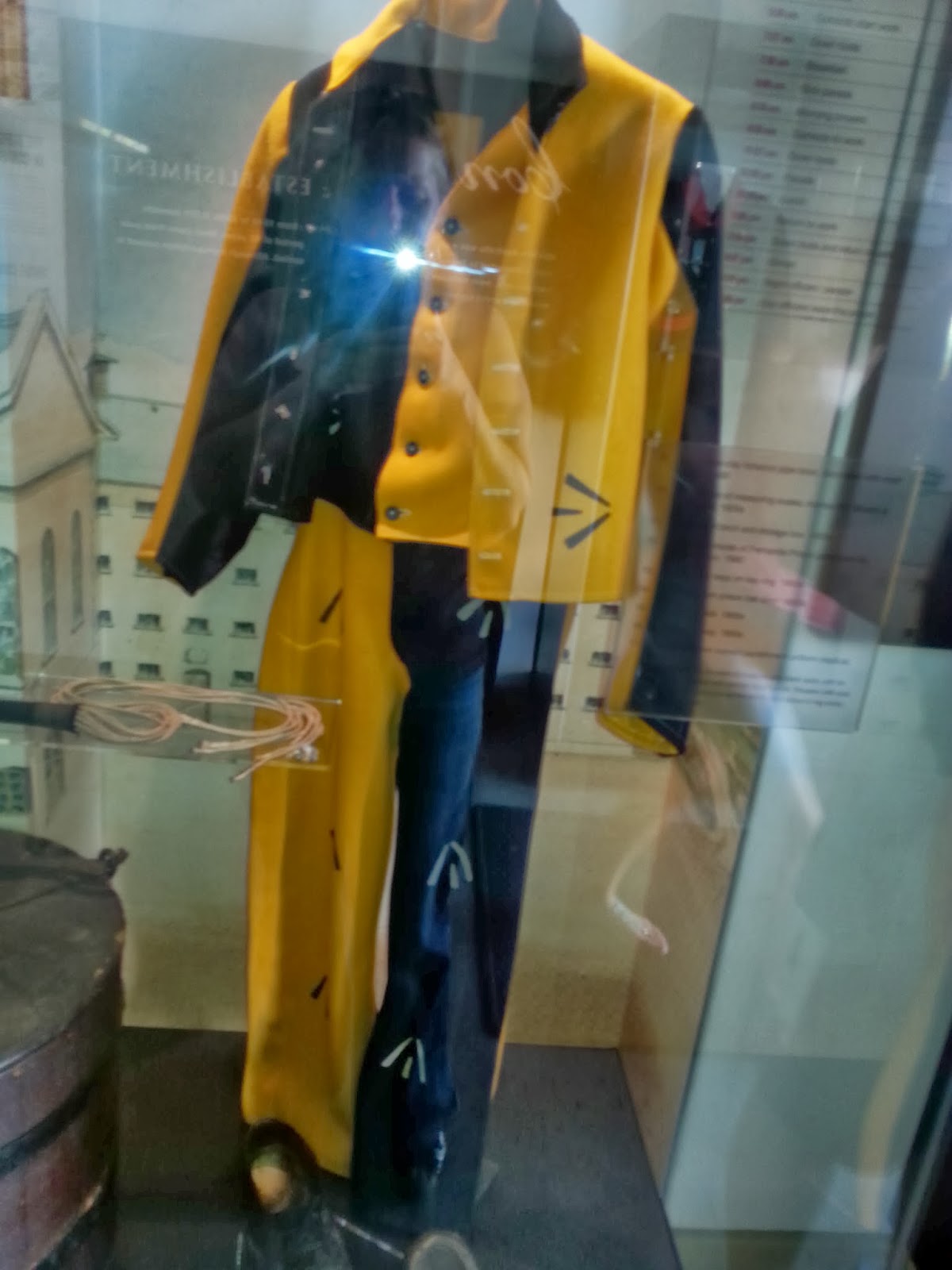 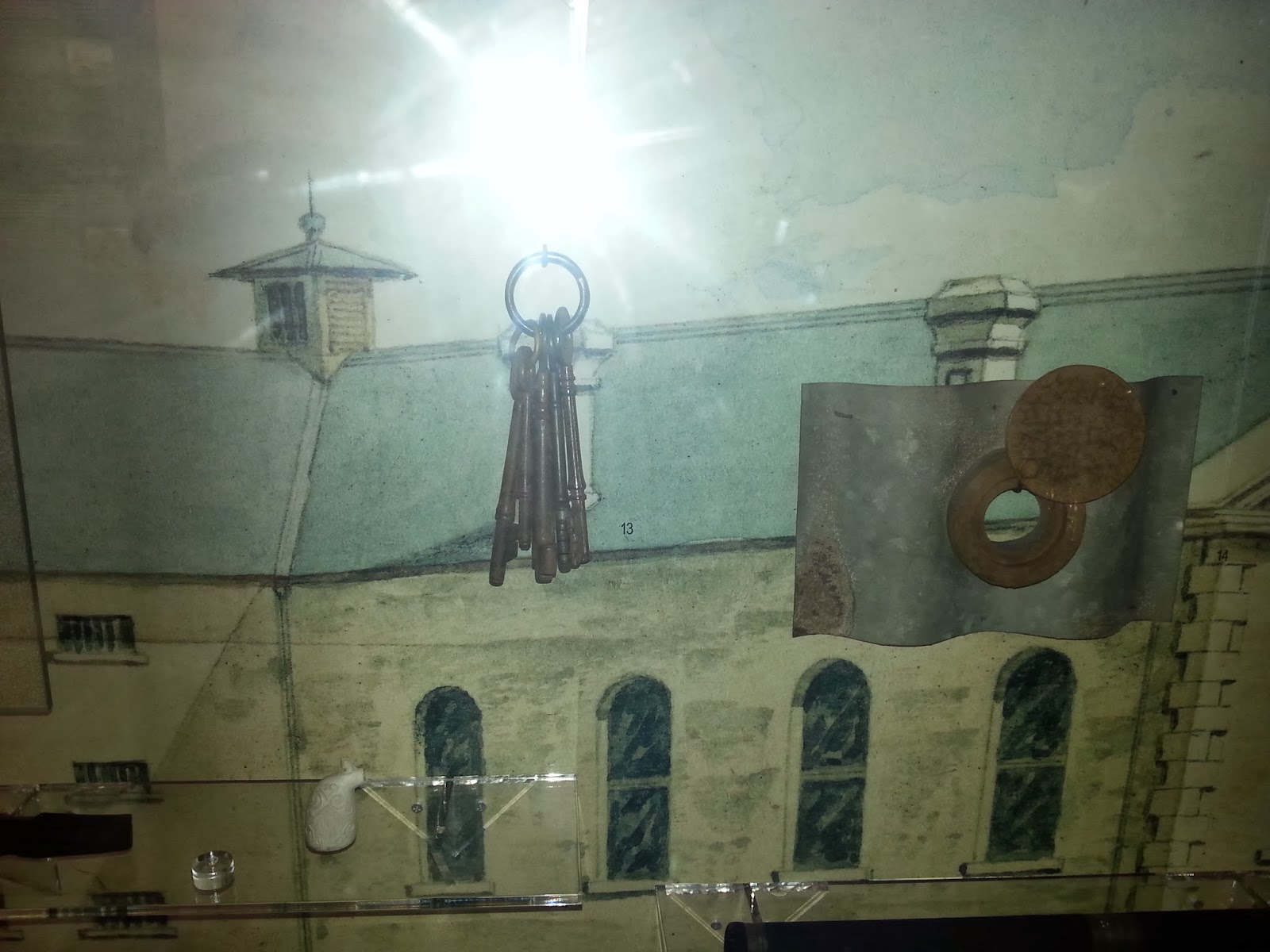 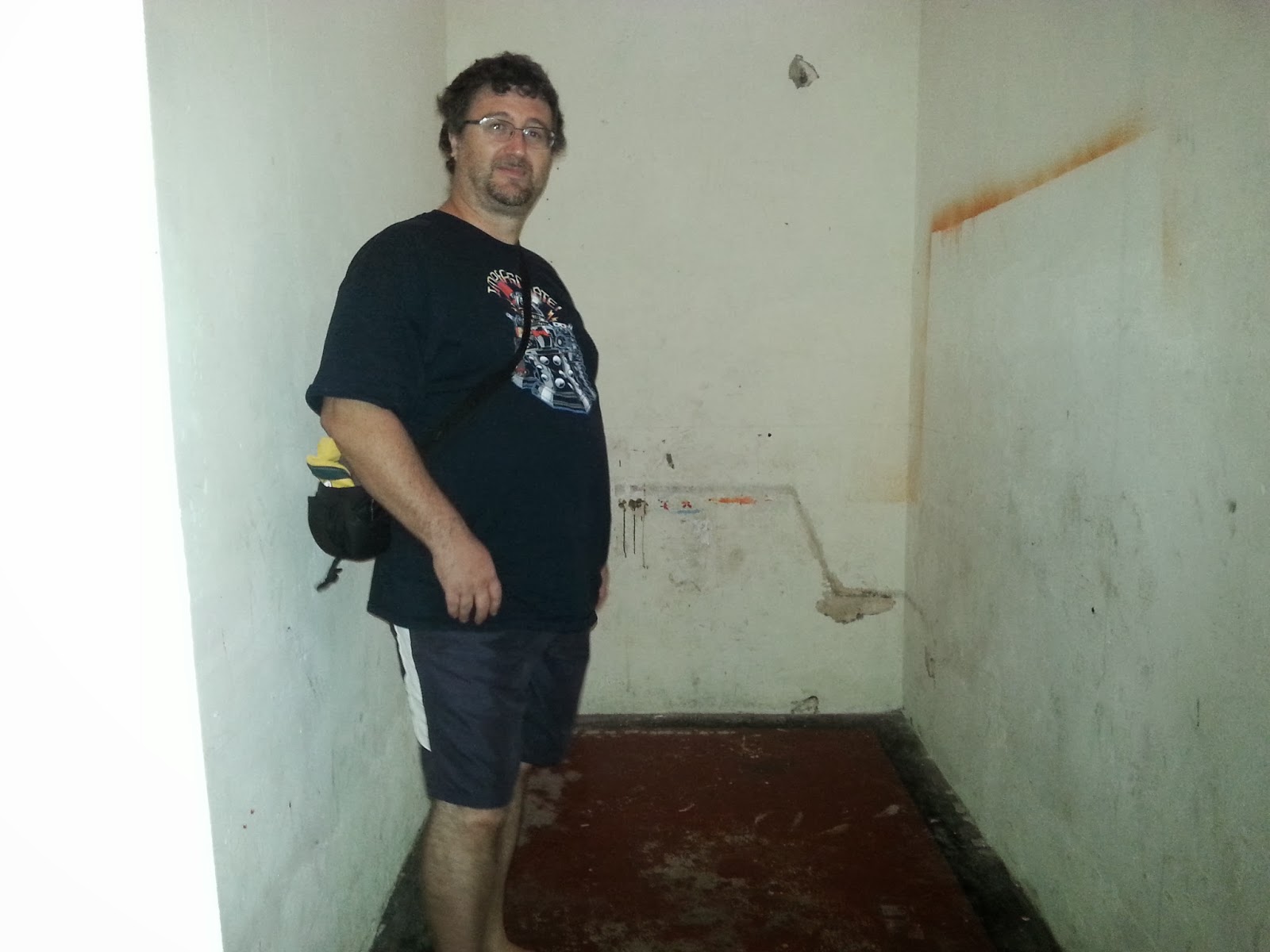 Lee, inside an original cell. As the years went on the cells got bigger. 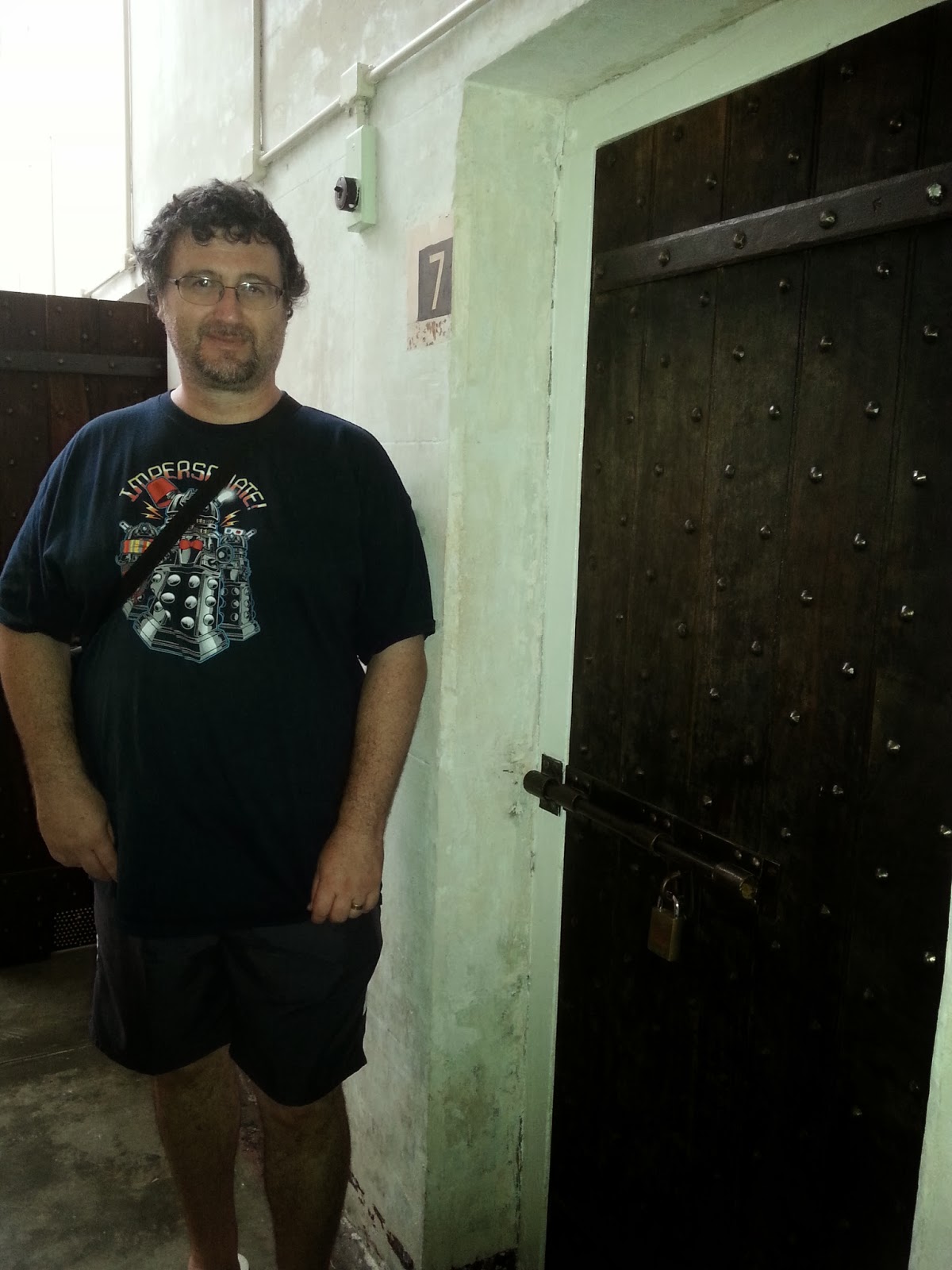 A shot of my husband. Because I love him.

Posted by battblush at 8:45 PM