I have to pull something good from this day. Came home this afternoon to find this waiting on my desktop, courtesy of Rich Horton's annual review of ASIM:

There were three particularly strong novelettes this year. Lyn Triffit's "The Memory of Breathing" may be the best, about executed criminals who have been reanimated to provide labor as restitution.

This story has done such good business for me. It still amazes me just how popular it's been.

The whole review is here, by the way.
Posted by battblush at 8:46 PM No comments:

Look at me, mummy

About three days before Christmas, Connor fell over and hit his head on the dishwasher door. I applied a bandaid and hugs and kisses and after a few minutes, he toddled off, secure in the knowledge there was still mischief to be found. I, however, was a mess. What if it had been worse? The possibilities of what could have happened ran through my mind. A couple of days later the bandaid came off and the incident was forgotten.

Yesterday I took him to the eye specialist to see what he thought of Connor's 'cross eyes'. Sometimes it's quite obvious, other times you can barely notice it, but lately it's been more of the former than the latter. There was some concern over his ability to look directly at an object. This meant that he no longer relied on both eyes and that it may already be too late.

The doctor ran the appropriate tests and gave me the good news. He still uses both eyes and his vision is clear. But it won't remain that way for long. We have to act now in order to make sure he keeps his eyesight. This means an operation. Yes, they want to put a knife into both my baby's eyes. The dishwasher incident is nothing in comparison.

My thanks to Calli for letting me talk through events this afternoon. I know the family is really feeling the strain, but we'll get through this together.

The thing is this. Ever since it became apparent that Connor had a problem (at about 4 months old) I've been asking myself if it's my fault. Did I do something wrong in labour that destroyed his nerves. Did I not push when I should have pushed, did I bear down when I should have panted? The simple answer is "no" he was born this way. But even knowing this, I still feel guilty. He's my beautiful baby and I shouldn't have let this happen to him. 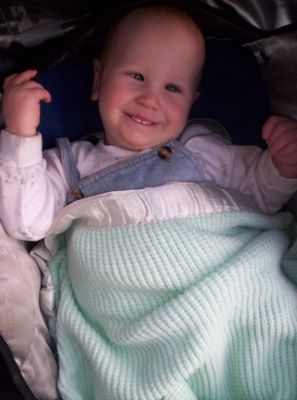 They're going to do what?
Posted by battblush at 8:17 PM 1 comment:

Here comes another one just like the other one

Last Book Read: Spotted Lily by Anna Tambour. This is also my book of the year.

Last Live Music Show Seen: The closest I could come to this was when we were all sitting around after Fandomedia singing popular songs set to a Rammstein theme. John Robertson, Lee, Chuckie and myself were particularly biosterous that night

Last CD Purchased: I'm a 21st Century girl. I have emule. If I was going to purchase a CD, it would be Robbie Williams. The man is HOT!

Last New Thing Eaten: Homemade Baileys and Fruit icecream. Made by my sister in law.

Last Thing Bought: Clothes. A new skirt (gyspy style, black, tiered, with a coin chain running around the waist) and three new tops (two sheer cos I wear sexy underwear and one plain but classy to go with jeans)

Last Piece of Clothing Bought or Received as a Gift: See two above. I felt so good about these purchases (bought yesterday afternoon) that I went home and told Lee we were going to Perky's after all.

Last Embarrassing Experience: Having a panic attack after assisting Chuckie on his alien panel.

Last Totally New Experience: Cooking turkey for Christmas lunch. It was dry, but the stuffing rocked.

Last New Bird Seen (feel free to substitute enthusiasm of your own if not a birder): birds are nature. I don't do nature. My own enthusiasms runs to my hair and buying handbags. Last new hair colour bought: Blueberry Hill (it borders on purple. I can't wait to apply it). Last hanbag bought: Lee bought me a Nightmare Before Christmas bag for - wait for it - Christmas. It carries my new art supplies.

Last Big Achievement: Part of me says "the Aurealis Award nomination" but that's not it. Getting my ex to finally agree that Aiden can come and live with me wins, hands down.
Posted by battblush at 8:21 PM No comments: